How do I report reviews that use slurs? I marked it as "low quality" but idk if that is reporting

BigReviewBoi's Review of 'THIS DOES NOT EXIST' by Lil Darkie

Not for everyone, but nonetheless a good ass album. High energy, always goes hard. There's some interesting instrumentation, and the lines, while "immature" as others have pointed out, are intentionally so and work well with the character

this guy made an account to review this album, and uses slurs in his review, tryin to report it

he’s leaving comments full of slurs on my reviews now, it doesn’t seem like there’s any way to report this though other than contacting you directly @Rob

A reporting feature is something I’d like to add soon.

I’ll edit his review tonight to remove those words. If he keeps it up, we can just ban him.

You can block him in order to have his comments not show on your reviews and to prevent future posts by him.

As far as “keeping it up,” he’s in my review comments making an argument specifically that those words aren’t offensive and shouldn’t be censored, while using them over and over again (specifcally tr*nny and f*****t) after multiple people in the thread explained why it’s wrong and how harmful it is, so it seems like intentional trolling.

And other people are following his example in other comments, like the user “cute” on the user “JoaoSantos’s” review. https://www.albumoftheyear.org/user/joaosantos/album/202885-this-does-not-exist/

Not sure if I want to block him yet, just because then it would erase the evidence and the whole conversation. Looking forward to the report function lol. Maybe adding something to the rules would help clear things up for people…

I’d also like to chime in as I’m trans and this “cute” person keeps using tr*nny in replies towards me.

… And now he’s claiming he wants to be banned if he can’t use slurs. 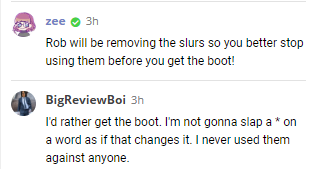 Would also like to report this while I’m at it.
https://www.albumoftheyear.org/user/shoutbox/conversation.php?x=27151&z=22841

“Tr*p” is a transphobic slur for a trans woman.

i am not the one who is passive aggressive and i am not the one who seems to be serving no purpose other than to try to act like a bully then try to get anyone in trouble who reacts to it, and certainly neither is bigreviewboi. but you seem to have decided that his comments which are blatantly made to try to have a proper discussion are “trolling”, despite how that’s how all of your comments would appear

it would appear that you are acting very underhanded
plus trap is not a slur and means a boy in anime or manga that looks like a girl, it is almost never used when not referring to either anime or people who specifically self identify as traps

the last one, of course, casually saying that bigreviewboi is ok with racism homophobia and transphobia

"Welcome to Album of The Year Forums — thanks for contributing!

Does your reply improve the conversation in some way?

Be kind to your fellow community members.

Constructive criticism is welcome, but criticize ideas, not people"

i should hope that if you have any reply to this that you adhere to the guidelines and not act aggressive and superior, which is what i would assume given the album’s comments

ok thanks for reading my blog

just want you to stop using slurs, thanks!

edit: yeah, i do regret feeding the trolls a bit. should’ve just reported you to begin with instead of fanned your flames

i’m afraid that nobody was “trolling” except for you, i can only believe that you truly mean that if you misunderstand the meaning of the word. the passive aggressive holier than thou attitude in that post is the kind of thing that made me reply in the first place

you could’ve just made comments that weren’t either complete bait or just nasty for next to no reason, but you keep choosing to keep it unnecessarily hostile

of course i’m not exactly claiming nobility, i’m just saying i was talking to you how you were talking to everyone else

it is not a slur, it is a casual word, does that mean i can’t acknowledge that words can be uncomfortable for people and not say it to them? no. there are some words i have a strong dislike for that most people would find incomprehensible for why i dislike them. but am i going to do something respectfully for someone who is being completely disrespectful in the first place? i don’t quite feel like it

and please look up the word, it being a slur is extremely common knowledge (“a casual word” lol)

This person joined and immediately followed this “cute” person so I can only assume they’ve been conscripted to harass me.

@Rob Can you please ban this guy, unfortunately blocking people doesn’t stop them from making new accounts to harass me, this is getting way out of hand. Blocking them also doesn’t prevent OTHER people from having to read all this potentially triggering extremely gross phobic stuff

also, I couldn’t find a way to spoiler those images so they had to be clicked to be seen.

This person joined and immediately followed this “cute” person so I can only assume they’ve been conscripted to harass me.

i don’t know who they are and that’s such a melodramatic post. i linked the album page on a couple discord servers because i thought it was funny, hardly a crime. i’m asking in the places i linked it on discord if anybody made an account but i doubt i’ll get an answer

and please look up the word, it being a slur is extremely common knowledge (“a casual word” lol)

i didn’t use a slur, as i have said many times

the situation began with you using slurs on my album comment, and then saying you wished an entire continent was annihilated, so

no, it began with you being insulting and incredibly hostile towards people for liking music you don’t like, don’t even try that
please do not pretend that you think “i support the russia funded iran nuclear peace missile program” is a serious post

and of course, yet again, no slurs used whatsoever

I don’t even have the option to block this wagwanman person because he hasn’t posted any content that generates an option to block. I can’t find anywhere to block him on his profile

I have no way to block this guy.

edit: Just saw you can delete the messages and did that. 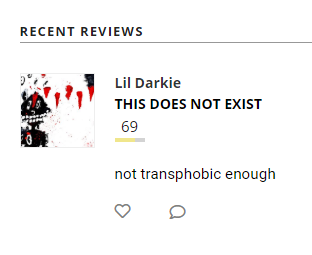 both from this guy again.

edit: this isnt even directed at me, he’s harassing other people now