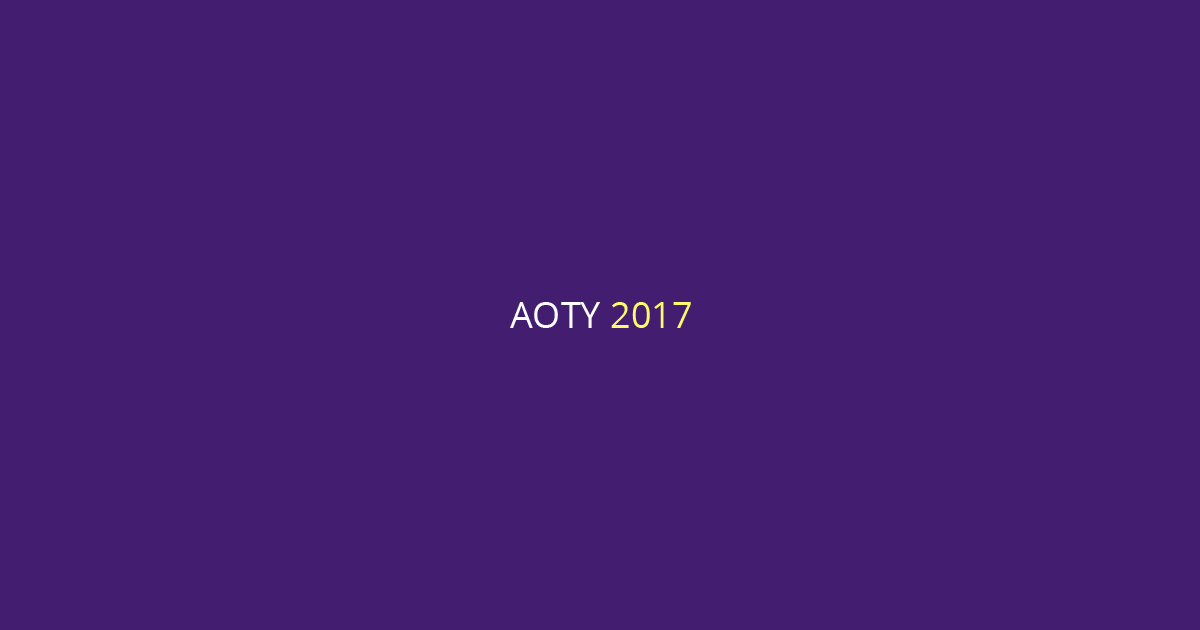 The top albums for 2017 generated by compiling year end lists from major publications.

Preliminary thoughts so far (18 lists in):

Kendrick and Lorde at the top is no surprise, similarly FJM (although that album was far more polarizing). Surprised that Thundercat is doing so well; I feel like that album sorta flew under the radar and also didn’t have the benefit of a late-in-the-year release. I predicted RTJ would get affected by its Christmas release but seems to be doing fine. Other lists conforming less and less to P4K by bucking King Krule, Mount Eerie to some degree. Courtney Barnett and Kurt are surprisingly high for such a low stakes, low concept album, though I guess a lot of people really like either one or both of them (Courtney top 5’d in 2015).

Biggest surprise so far is how much Fleet Foxes has been shafted. The album got nothing but praise on release and was super high profile, but no one seems to be putting it anywhere near their top 10, and many are forgoing it altogether. Not sure if it was overshadowed by the FJM and Kendrick releases from around the same time, or later in the year shit like LCD, St. Vincent, etc., but I thought it would place top 10 for sure, now it looks like it will struggle for top 50!

Some smaller name releases coming up big from their respective markets; Wolf Alice from British publications (not sure why they didn’t catch on in the States as much, and AOTY users seem to agree, but I think the album’s wonderful), and Kelly Lee Owens in electronic publications. Will be interesting to see who after Kendrick and Vince Staples does well in rap - so far a lot of British rappers (Stormzy, Ghostpoet, Loyle Carner), maybe a nod to Skepta winning the Mercury.

Perfume Genius is a sleeper I could see sneaking into the top 10; probably his best album and IDK anyone that didn’t like it, thought it came out the same week as Slowdive. The National, LCD, St. Vincent, War on Drugs are still locks for top 10 at this point in their careers, LCD probably just cause people are stoked about the return (album is NOT top 10 material, IMHO). Nice to see some love for SZA on the debut, kind of a slow year for R&B in general but she and Sampha held up the fort nicely with two very different styles. Critic fav. Grizzly Bear noticeably low, certainly speaks to the album’s quality w/r/t their last few releases. Some critical love for Paramore is fun. Protomartyr still underrated, as is Alvvays; not sure what it’ll take for them to breakthrough.

Certainly the biggest disconnect between AOTY users and these lists is on rap w/r/t Tyler and Brockhampton; hugely popular and successful and well-known regarding anyone who knows anything about American rap these days, but not on the radars of a lot of the bigger, more accessible publications. A lot of people seem scared away from Mount Eerie, understandably. Smaller, under the radar artists like Phoebe Bridgers, Aldous Harding and Jane Weaver popping up out of the woodwork, good for their exposure. Ryan Adams too high, maybe riding a resurgance of popularity cause of the Strokes book that came out. People moving on from Waxahatchee to newer indie rockers like Jay Som and Big Thief.

awesome to see Aldous Harding at 18. I hope that record can hold on for a top 20 finish. 34 is too low for Alvvays, 47 is way too high for Sheer Mag.

Rolling Stone need to stop their nonsense obsession on U2. I mean Songs of Experience generally panned by critics yet they named the album as the third best album of the year on their list.

Some links/URLs didn’t work when I’m trying to upload them. Is there any solution to this problem?

Some links/URLs didn’t work when I’m trying to upload them. Is there any solution to this problem?

That most likely means that link was already submitted. Any examples?

Makes sense. Anyway, I noticed that there’s a lot of missing lists on the aggregates for previous years. Is it possible to update those previous aggregates by adding all that missing lists of their respective years? I’m interested to help so the previous data will be more comprehensive.

Yeah, if you see any older lists that are missing, feel free to submit those as well. They won’t be added immediately, but I’ll get to them eventually.

I also changed it so that each submission must only be unique per user. This will give me a better idea of which lists are more popular.

That’s good. I think I’m gonna start with 2014 first followed by 2015 and the rest aggregates lists. And hopefully we can create the new aggregates lists for songs of those missing years (2008 - 2015). Is it possible too?

Out Of Topic, but Rob, what happened with disqus? I miss seeing the discussion of AOTY readers. If you cant get it back, can you please create a forum section for readers to make threads and/or posts? Thanks in advance.

Out Of Topic, but Rob, what happened with disqus? I miss seeing the discussion of AOTY readers.

I phased out Disqus to try to limit the number of separate accounts required to converse on the site.

If you cant get it back, can you please create a forum section for readers to make threads and/or posts?

I think you’ve found that place. Users can create topics at will here.

Miss me with that top 12

I really thought King Krule was going to be this year’s Car Seat Headrest. Both him and Fleet Foxes are being hugely underrated in my opinion. Mount Kimbie should be getting more love than it’s getting right now as well imo, and LCD Soundsystem might be the most consistently overrated album. I mean it was good but no way it was that good.

There’s important lists that are missing in the aggregate. Hopefully you can add them real soon. Here’s the lists :

I obviously agree. You think $$ may have something to do with that?? Duh. No one takes RS seriously. It’s been a joke for maybe it’s entire existence.