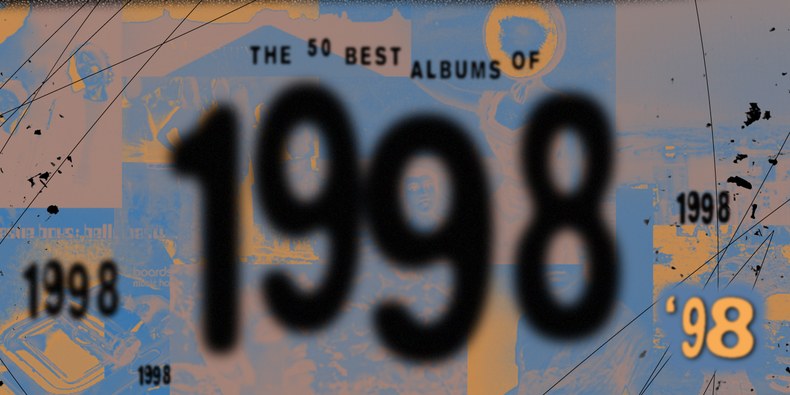 edit: I feel like at this point Pitchfork could just recreate every EOY list to reflect their current POV.
They’d probably put a rap/hip-hip/r&b album at the top of every year…

Does seem to be a bit of a skewed look back at 1998 through the lens of today’s P4k.

For example, they originally gave Blonde Redhead a 5.5 and it’s ranked #46 of the year here. While, back in the day they gave UNKLE’s Psyence Fiction a freaking 9.8 and it’s nowhere on this list. ¯\_(ツ)_/¯

That said, the only other album besides UNKLE’s that I think they should have included is Roseland NYC Live, which in my opinion is at least on par with their first two studio albums.

I guess trip-hop/downtempo have been out of favor for a time now.

They should do this annually… that way the best albums of 99 - 2009 can be changed to reflect rock’s ever declining relevance.

I’m sure this new definitive listing will reflect how all these white writers were so down with the genre at the time… cause Jayson Greene, Ian Cohen, and Meghan Garvey are experts when it comes to identifying rap albums that function as relevant and timeless.

Just noticed that Aquemini was the 50th best album of the 90s when Pitchfork made this list in 2003:

It's been just over four years since Pitchfork published ...

Glad Elliott Smith is so high, though Refused at 30 for making what is generally considered the best punk album of the decade is a little off. Not the worst list they’ve made

I was hoping Squarepusher’s Music is Rotted One Note to be there but… it’s not. They originally gave that album a 9.8 as well.

to think of a time when pitchfork gave two albums a 9.8 in one year. Nowadays, nothing can be rated higher that Kendrick Lamar’s latest album.

other 9.8 to UNKLE’s Psyence Fiction.

I always meant to revisit that album. I remember it was supposedly a departure from Hard Normal Daddy and Big Loada. The reviews were great, but it was not grabbing my attention at the time…

Duster´ Stratosphere don´t make the list, so is bullshit.

Their UNKLE thing is so weird. When they gave Never, Never, Land a 5 they still called it an improvement over Psyence Fiction, and described the first record as "“one of the most anti-climactic and jaw-dropping disappointments of recent years.”

Similarly, they originally only gave Lauryn Hill’s album an 8, then deleted the original review and gave it a 9.5 for classics Sunday, acting like they’ve always loved it. The original review said “running nearly 80 minutes long, the album has a hard time staying sharp throughout. Ballads like the title track are tiresome after the first full hour of listening, and additionally, Hill’s sweet tooth for cheesy '70s tunes rears its ugly head more than once.”

Pitchfork really tries to rewrite its ratings without directly rewriting them.

Sidenote: Yes to PJ Harvey’s Is This Desire? in the top 10! Was worried they’d forget about that album.

Which is more valid? An album review from 1998, made in the musical and cultural context of that specific point in time, in reaction only to what came before it? Or a review from 2018 which takes into account the current zeitgeist, 20 years of musical evolution, and the album’s lasting impact?

Is that what’s happening with this list? Is it a current re-evaluation of the year’s releases? Or is it evidence of some editorial shift at p4k?

Nah bro, people overrating Aeroplane from one of the best of the year to top 10 all time, great album, but best of the 90s? Would be lucky to get in the top 10

Belle and Sebastian: The Boy With the Arab Strap

The Scottish band’s excellent third album features some of their darkest and most detailed songs. Wholly beautiful and delicate, it was Stuart Murdoch’s first reluctant step into the spotlight.