What's the criteria for the albums that appear in the homepage?

@Rob I have already asked this but I’m bringing it up again because of something that is happening today.

Is there any special requirements for the albums that appear in the homepage (https://www.albumoftheyear.org/) ? Because I can’t find any common patterns or anything. See, same happened with Nathy Peluso’s Calambre.It had 21 user ratings for a positive score, yet some other albums no one was paying attention to appeared on the homepage. It also has a 90 critic score but from only one publisher.

Today, as of 16:39 in Argentina (14:39 in New York), C. Tangana’s El Madrileño has 35 ratings and an 85 user score, which would’ve gotten it the #1 spot in the best albums user’s score chart for 2021 with the minimum of 25 ratings we had before it was changed because of bots and stans. Guess what, it’s nowhere to be seen in the homepage. Meanwhile, some other albums with little to no attention at all are featured in the homepage, like Maxïmo Park’s Nature Always Wins with only six ratings in the user score, or A Winged Victory for the Sullen’s album with only 14 user ratings.

So my question is, what decides what appears in the homepage? It’s clearly not the user’s interest, so is it a weird algorithm? are they handpicked by the mods? Is it based on critic score? I consider this very important because the homescreen is literally what everyone accesing the site sees first, and it gives albums a very important boost for appearing in the website’s chart.

(I add some images to illustrate) 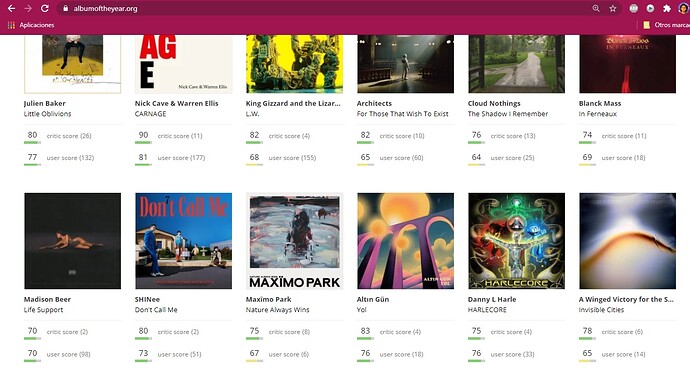 Not Rob, so I can’t be certain, but I think it’s a mix of Critic ratings and User Scores, mostly based on popularity rather than average.

There’s a number of factors, all of which were pretty much hit on. Popularity is a factor, but it’s not the most important one, otherwise the front page would just be the “Popular Now” feature that’s found lower on the page.